Phenotyping and the Bucketmouth Beard

When the Personal Genome Project(PGP) launched and the first ten volunteers were inducted, it was clear that they were intent on more than just genomics. Most of us were photographed with a little 10cm ruler taped to the middle of our foreheads. This had the effect of making us all look (and feel) as if we were being hauled in for a DUI, but I think that was inadvertent. The only use that could arguably be made of that little bar grid was to phenotype us. That is, the PGP wanted to make an effort to describe and measure exactly the look, feel, shape and dimension of the protoplasmic projection of those genomes they were sequencing. That set the bar very high indeed.

As we have come to realize, phenotyping is easier said than done, and it doesn’t exactly roll off the tongue in the first place. I can extract at least a couple bits of crude phenotype from those early PGP photos. (For reference, see my earlier blog post Patients in Waiting) Interpupillary distance (how far apart are your eyes) is an important human metric. It undoubtedly follows a bell shaped Gaussian distribution, and a narrow one, because if it’s too short, you look cross eyed and stupid. If it’s too wide, you look bug eyed and alien. Two important points quickly emerge. There are numerous phenotypic designations already in common usage, and they are usually offensive. Scientists wanting to tease apart the many genetic and embryonic influences on craniofacial development that determine our interpupillary distance need to be able to talk about it without being hissed at by enforcers of the politically correct. Niceties aside, it’s pretty clear that Steve Pinker, PGP-6, and James Shirley, PGP-10, are the cross-eyed and bug-eyed outliers of our particular group. 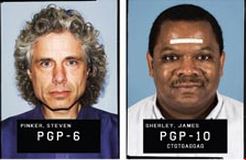 My son and I share an SNP in intron 86 of the HERC2 gene, controlling expression of the adjacent OCA2 gene, and predicted to result in a blue colored iris.

You can also assess skin pigmentation, just based on whether you are whiter than your strip or your strip is whiter than you. James Shirley and Rosalyn Gill are probably our diversity winners, but melanization can be measured more precisely than this.

All that is missing from this phenotypic analysis is precision, reproducibility, a common accepted semantics, and a testable underlying theory of genetic contribution. In addition, many people actively subvert accurate phenotyping by altering their appearance with cosmetics, surgery, prosthetics, dentistry and the coloring and shaving of hair. Only George Church of the original PGP-10 gave us a full view of his facial hair phenotype.

I was mildly curious about this, so I grew out my own beard. Nothing like a World Series on the line or anything – I just wanted to have an accurate phenotype. There’s been a lot of discussion around our labs about what a beard is for in the first place. Is it a microbiome warehouse of stray composting food particles  so you can mix probiotic bacterial spores into your mouth while you eat with your fingers? Is it the opposite of a love handle – a hate handle that you can grab and jerk on if you’re not receiving the full attention of the owner?

Imagine my surprise when mine grew out – the first time I had seen it since college – and it had bands in it. Seriously – from ear to chin, it goes dark-white-dark-white and then back up the other side in the same order. Not all people can grow a beard. Not all of them who do grow one have a striped one. WTF? I probably would have just left that thought to the dustbin of time and the ravages of senile dementia, but the next day on TV I saw an interview with Shane Smith, founder of Vice Media. It was an “I am your father Luke!” kind of moment.

So I took a few photographs and made some observations. I now think your beard is there to make you look authoritative and scary. If I open my mouth really wide and say something really mean, like “What the f*** is going on here??!!” the black bands make it look like my mouth is maybe 5 times bigger than it really is. I have a bucketmouth beard. Is this genetic? Looking back at the PGP, George Church kind of has one too. But I think both of us will recall that our beards were originally solid, not striped.

So here is my theory: Beards are secondary sexual characteristics of males that initially signal the onset of sexual maturity, the adequacy of whole body testosterone activity and the desire to advertise oneself as a suitable mate. Beards are initially solid in color, and the fullness and density of the beard can be used to advertise vigor, health and adequate strength and nutrition. As men age, those who are continuously in a position of authority as a group leader or chief undergo epigenetic changes that enhance the loss of  beard follicular melanin in a banded pattern. (George has been the head of Harvard’s Church lab since 1986; I have been CEO of Cayman for 35 years; Shane is a whippersnapper but he’s the founder of Vice) This banded, bucketmouth beard increases the intimidating appearance of facial gestures and reduces the physical effort required to maintain order among unruly subordinates. This is an easily testable hypothesis, although no biochemical basis is proposed. In short, you can’t be the boss until you’ve earned your stripes.

I’m really curious how common this sort of beard pattern is in the general population. Curious enough, that I’ll send a FREE Philips Norelco Vacuum Beard Trimmer to my favorite 5 photographic examples of a bucketmouth beard. Submit your beard one of the following ways:

Email the picture to my address, KirkMike157@gmail.com

There was an elegant paper in Science recently that described precisely the underlying embryology and endocrine biochemistry leading to the stripes and bands on King Cheetahs and Mackerel Tabby cats. A single gene mutation distinguishes the cat on the left from the one on the right. However, at least four additional genes work in tandem to establish the striped pattern.  My wish for the Personal Genome Project is that it will someday let us know as much about ourselves as we do about our cats.